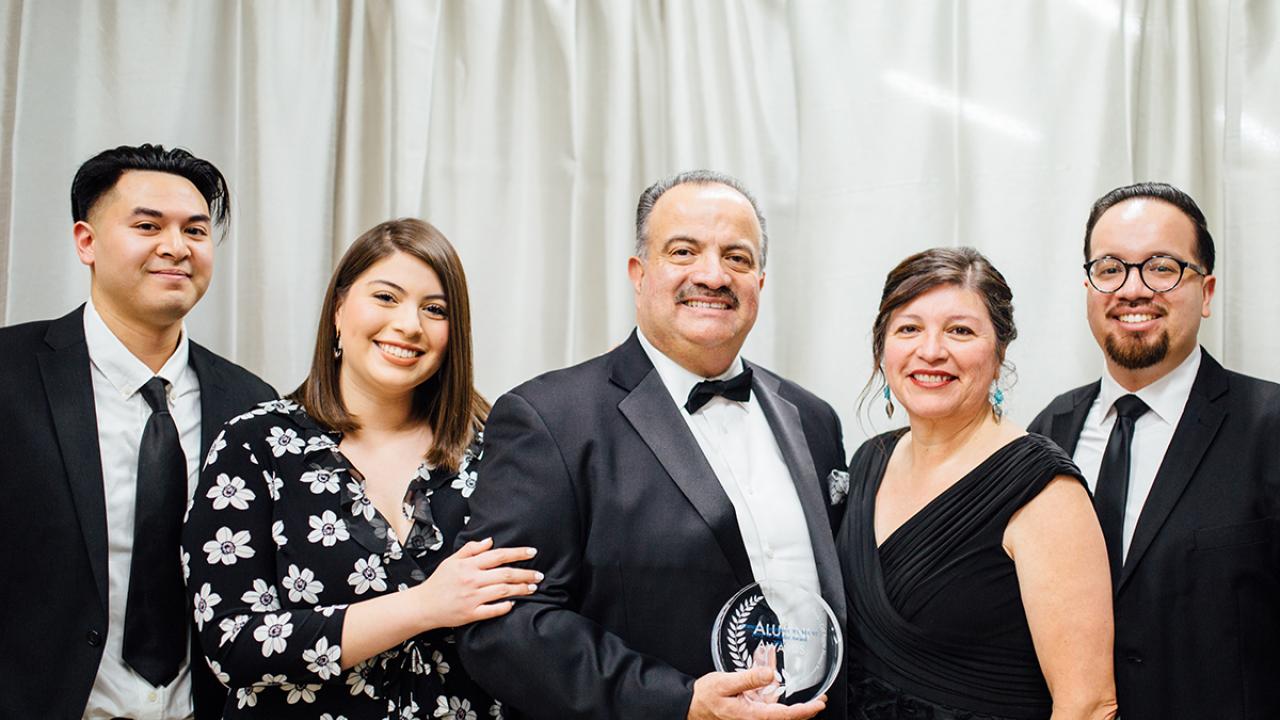 Francisco Rodriguez ’85 M.S. ’97 was honored at the Alumni Awards Gala on Feb. 1 as this year’s Jerry W. Fielder Award winner. This award is named to honor the lifelong commitment of one of the university’s most esteemed and supportive alumni.

As chancellor of the Los Angeles Community College District – the nation’s largest community college district – Rodriguez embodies the spirit of this prestigious award. Through his career and volunteer efforts, his relentless commitment to driving students of all backgrounds to their full potential through higher education has impacted thousands of lives.

“My parents planted seeds of possibility and opportunity,” gleamed Rodriguez, a CAAA Lifetime Member. “Their selfless example of working in factories, standing on their feet for over 30 years and never missing a day of work showed me that my role as a student was by far easier. Additionally, it taught me that I had a responsibility to use education as a tool to help others.”

Rodriguez devoted the next 30 years of his life as an educator, faculty member and an administrator within California public higher education. He has also volunteered extensively as a UC Davis alumnus, including former service as president of the Cal Aggie Alumni Association (CAAA) board of directors and currently in the Chicanx/Latinx Alumni Association. He is also a former member of the UC Davis Foundation board of trustees and the School of Education Dean’s board of advisors. Additionally, he is an honorary member of Hermanos Macehual de UC Davis, a community service organization that provides academic and social support to students attending UC Davis.

“Staying in touch with the university and supporting it helps me be a proud Aggie, no matter where I go or role I have played,” Rodriguez explained.

Rodriguez was born and raised in San Francisco knowing little about higher education options. His sisters attended the local community college, and he heard about UC Davis through his counselor. Rodriguez said the financial and academic support he received from first-generation programs and services transformed his life.

“I had multiple lives at UC Davis as an undergraduate student, as a graduate student who was working full time, as a volunteer and as a member of a staff there,” Rodriguez said. “I arrived as a 17-year-old, not knowing a single person, but was drawn to the strength of the academic programs and the opportunity of a life outside of San Francisco.”

Rodriguez said he left UC Davis 17 years later, rich with friends, memories and experiences that still inform his career and family today. He later served as president at the MiraCosta Community College District for five years and president at Cosumnes River College for six years, before beginning his tenure as chancellor of the Los Angeles Community College District in 2014.

Rodriguez’s efforts and influence affect students statewide –– he was instrumental on an initiative that promised every high school senior at Los Angeles Unified School District a guaranteed seat at any Los Angeles community college with one year of free tuition. That effort led to a statewide change, Assembly Bill 19, which provides every Californian one year of tuition-free education at any community college in California. The state legislature will now consider a second year tuition-free education for all Californians through Assembly Bill 2.

Rodriguez said he is fortunate to experience many proud moments throughout his career such as sharing the joy of seeing students succeed.

“When I handed my daughter her associate’s degree, that was amazing,” Rodriguez said. “My daughter attended MiraCosta College, where I was president at the time, and I was so proud to see her walk across that stage and be able to deliver her degree – that was an incredible one-off experience.”

Compelled to make a difference

Rodriguez is not only committed to higher education, but he is also an active member of many service and community organizations including the Los Angeles Area Chamber of Commerce, Unite LA, the local Rotary Club, Wheelhouse and regional economic development councils.

“Receiving the Fielder award is a personal privilege that recognizes the support and sacrifice of my family,” Rodriguez said. “I’m humbled and honored and would like to express incredible gratitude for those who nominated me. We do this work not because of the recognition that we may receive, but because of the impact it makes to transform lives.”