Voices of the Change Generation 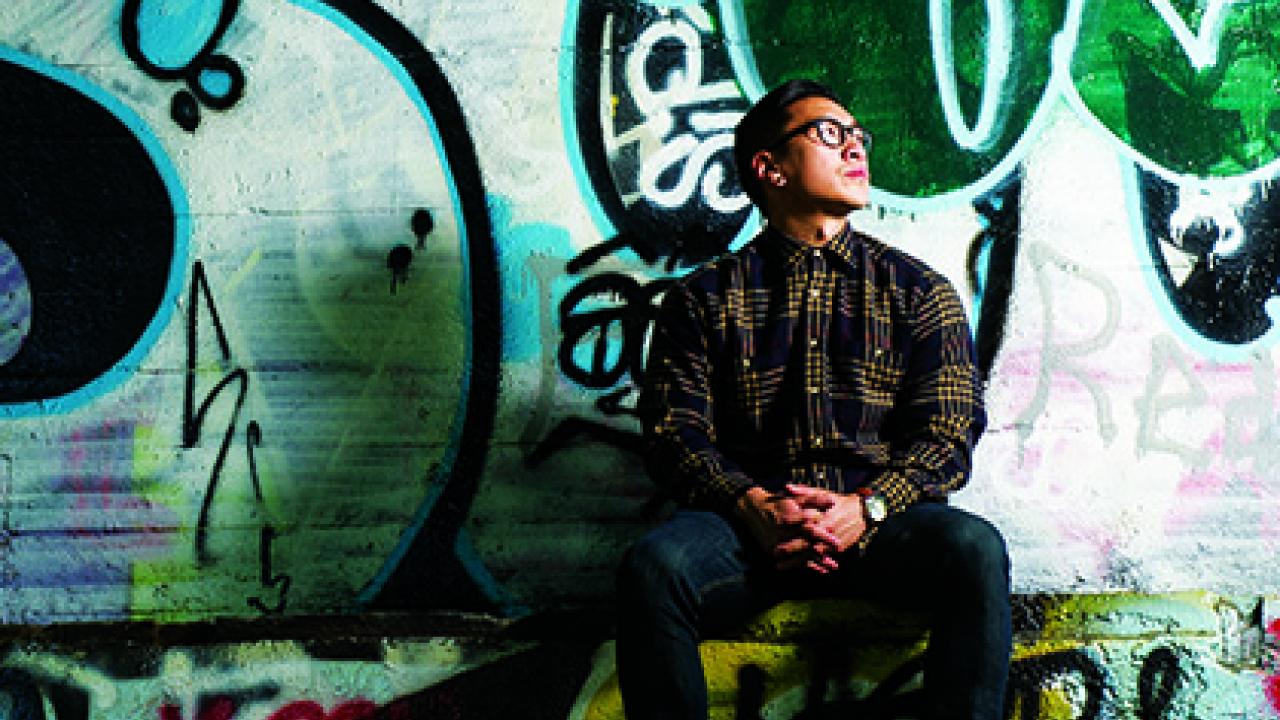 These four alums have at least two things in common besides being Aggies: They’re fearless in their pursuit of societal change, and they’re using technology to amplify their messages and reach more audiences than ever before.

This is the “Change Generation.” Its members are tackling global challenges like social inequity, cultural differences, hunger and domestic violence. In the process, they are inspiring others to join the conversation and seek opportunities to improve the world around them.

﻿Fong Tran ’15 is using his voice—literally—to empower youth at UC Davis and around the world.

An activist-turned-artist, Tran performs spoken-word poetry in colleges across the country, including UC Davis, and in the Philippines. He speaks of community building and achieving positive change.

“Activism is to realize the current reality isn’t good enough and want an alternative that’s better,” Tran said. “Poetry helps me present that reality to people. Talking about my own narrative gives it a human perspective.”

Tran weaves stories about his family scrambling to survive in the South Sacramento area after migrating from Southeast Asia during the Vietnam War. His mom, whom he calls his biggest hero, raised five kids alone on food stamps and welfare.

Students are finding value in Tran’s words. His most popular YouTube video has 178,000 views. While that gives him validation as an artist, Tran said he is more interested in raising a critical dialogue around issues of social justice.

“You often hear that young people are the future, but the future isn’t tomorrow—it’s today,” said Tran, who recently completed a master’s degree in community development at UC Davis and works as an adviser at the Cross Cultural Center.

“I’m working with student leaders who are looking beyond their own career ambitions to think about society and what kind of impact they want to make on the world. They need a seat at the decision-making table now.”

﻿Nearly 3,000 miles away, Dominique Gebru ’12 is also helping students discover and develop their leadership skills. A Peace Corps volunteer in Jamaica, Gebru serves as the youth literacy adviser in a small, rural primary school in Trelawny Parish. The Napa Valley native helps students who have fallen behind in their reading and writing, and recently relaunched the school library with grade 6 students.

“The school’s small staff had a hard time checking out books on a regular basis,” Gebru said. “So I created a library monitor program that the students could run, and they stepped up to the plate with such grace, it filled my heart with pride.”

“It’s difficult to prepare yourself for life in another country, but I’ve learned to be open to the experience and embrace life for what it is, hardships included,” Gebru said.

The Peace Corps recently selected Gebru as a top blogger in its annual Blog It Home contest. She joins seven other winners on a tour of Washington D.C. this fall to share stories of her service with the American public.

“To share the beautiful, warm Jamaican culture is to celebrate all that it and its people have shared with me,” Gebru said. “Cultural exchange is important because it grows our understanding of the different elements of our world. With greater understanding comes more peace.”

﻿Gebru’s fellow ’12 classmate Edward Silva also took lessons learned from travel abroad to heart. Majoring in international agriculture development and minoring in technology management, Silva immersed himself in study abroad. He frequently observed the lack of simple technology available to smallholder farmers, which reminded him of his childhood growing up on an almond farm in the Central Valley. His dad often tinkered with little technology projects to keep everything running smoothly.

“If we didn’t have the machinery, my dad would try and build it,” recalled Silva. “I was a curious kid, and my dad’s use of technology to solve various challenges on our farm left a lasting impression on me.”

Silva came up with an innovative ag-tech solution of his own in a village in Zambia, where he helped Ph.D. students replace kerosene lanterns with solar-powered light. He became preoccupied with how that same light technology could be used for ag.

The result is Henlight, a little solar-powered light that small-scale poultry farmers can use in chicken coops to encourage more consistent egg production throughout the year, including the fall and winter when days are shorter and have less sunlight.

The startup gained attention and $10,000 in seed funding after Silva’s team placed first in the Thought for Food Challenge 2013, an international business competition seeking breakthrough ideas to meet the world’s food demands by 2050.

Silva, formerly program coordinator at the UC Davis Child Family Institute for Innovation and Entrepreneurship and the Sustainable AgTech Innovation Center, is the business lead for Henlight. He said a lot of work is yet to be done, but the entire experience has humbled him.

“Millennials want their work to have an impact,” Silva said. “Ag and food literally touch every person on earth, and all of our basic necessities revolve around them. So to be able to transform my passion from an idea to a solution that helps farmers and our food supply is a really good feeling.”

Merrill is the communications and development manager for the California Partnership to End Domestic Violence, which comprises more than 1,000 organizations and advocates throughout the state—all working to end abuse in their communities.

“Our generation is great at maximizing impact by using different influencers and thought leaders online,” Merrill said. “I’m a part of that, and it’s really exciting.”

To support October’s Domestic Violence Awareness Month, Merrill created a digital communications toolkit for members to use, including shareable images and facts, mini TED-like talks on YouTube and a media guide.

She also led live online video chats with the public, discussing prevention and intervention strategies and factors that contribute to domestic violence. One of Merrill’s primary responsibilities is to publicize partnership-supported legislation such as AB 2321, which resulted in the new “California Says NO MORE” license plate. The plate, available at NOMOREplate.org, raises funds for awareness and prevention efforts.

The American studies graduate said social justice is a common interest among her peers, and social media is their go-to tool to initiate change.

“Whenever there’s a news story about domestic violence, it’s not uncommon for people to ask, ‘Why didn’t she just leave?’” Merrill said. “I use social media to reframe the conversation and place accountability where it belongs—on the abuser.”

The importance of supporting survivors is deeply personal for Merrill, who said she experienced an abusive relationship as a teen and found limited resources available to help. She added that she’s proud of her organization’s work with schools to implement policies on adolescent dating abuse, including education about healthy relationships.

“I don’t want future generations to experience what I went through,” Merrill said. “I want domestic violence to be absent from their vocabulary.”