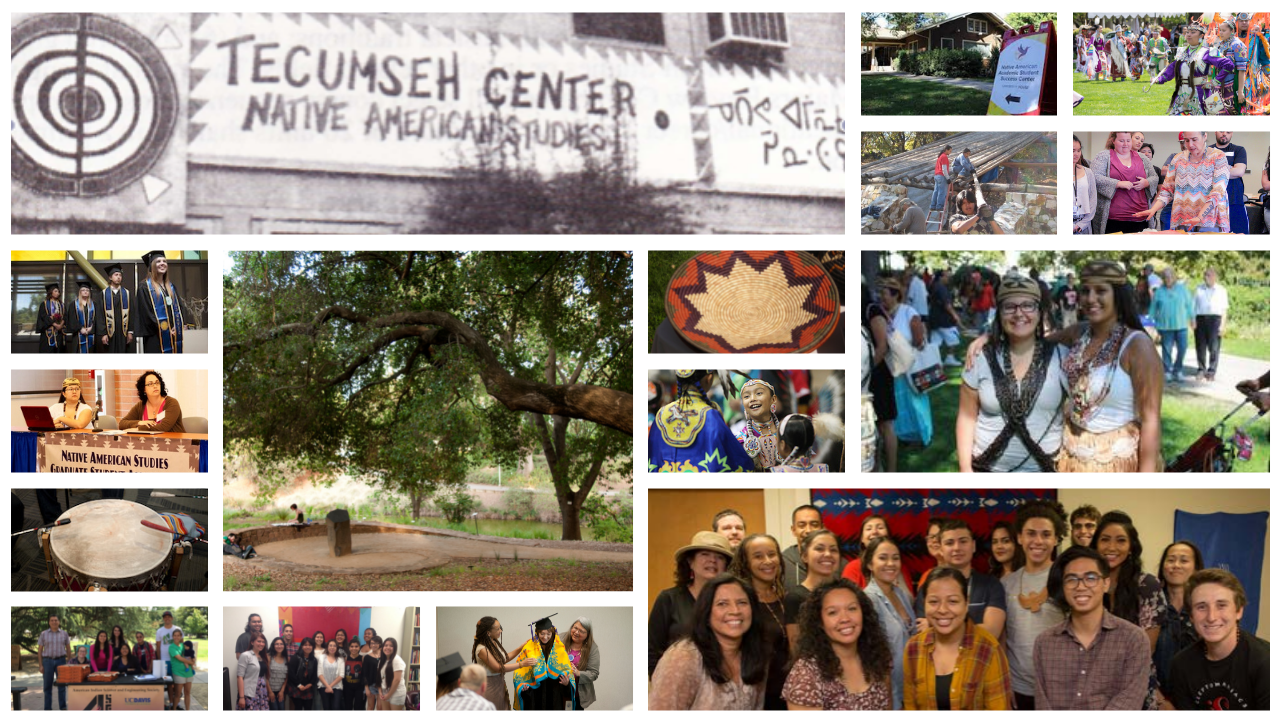 Indigenous Peoples' Day celebrates the beauty, strength, and joy of Indigenous peoples of the Americas, past and present. Indigenous People's Day acknowledges the rich and diverse histories of Native American people and renounces the false narrative that Columbus discovered America. We ask you to join us in honoring and uplifting Native voices and peoples, today and everyday through history, resources, videos and voices from Native American Aggies.

It is important to acknowledge the land on which the UC Davis campus is located. For thousands of years, this land has been the home of Patwin people. Today, there are three federally recognized Patwin tribes: Cachil DeHe Band of Wintun Indians of the Colusa Indian Community, Kletsel Dehe Wintun Nation, and Yocha Dehe Wintun Nation.

The Patwin people have remained committed to the stewardship of this land over many centuries. It has been cherished and protected, as elders have instructed the young through generations. This campus is Patwin land and remains an important part of Patwin heritage and identity.

We also take a moment here to remember Chairman Emeritus Marshall McKay whose visionary leadership and kindness had a broad and deep influence across Indian Country and beyond, and Patwin Elder, Edward "Bill" Wright, who offered us many blessings and was pivotal in the work of the UC Davis project to Honor the Patwin and Native Americans, helping us be in better relation with one another and with the Land.

One way to learn more about Native American Peoples at UC Davis is to visit and learn more about the Native Nest. In the video below Kaia Yellowhorse '21 (Oglala and Tlingit) speaks about the space as a small, tight-knit community that is a big part of Davis.

There are many stories, including Lindsey Balidoy ‘19 (Bad River Ojibwe and Tiwa Pueblo) and her story of being queer and Indigenous in academia. She highlights in Cultural Survival Quarterly Magazine the importance of centers and celebrating spaces for Indigenous students:

“I will forever be grateful for the Native Nest, a space on campus for Indigeneity to thrive. Officially called the Native American Academic Student Support Center, the Nest offers programs, services, and holistic support in a culturally relevant manner. This physical space allows Indigenous students to connect, explore our identities, and legitimize our presence on a big university campus. Built like a cottage, I learned how important  physical space was, how big of a deal it was having this designated location for us to gather. The Nest played a pivotal role in my own personal development and academic success.”

As we celebrate Indigenous People's Day, the Native American Alumni Association developed this virtual celebration of people, resources and history to support all Aggies in the understanding of the thriving community of Indigenous faculty, staff, students and alumni and a way to move beyond the perspective that Native people are relics, grieving ghosts or inferior communities of the past. We celebrate this day to recognize that Native people are alive, thriving, complex, compassionate, boujee and so much more than the disparate perception that settler colonialism has brought to these lands.