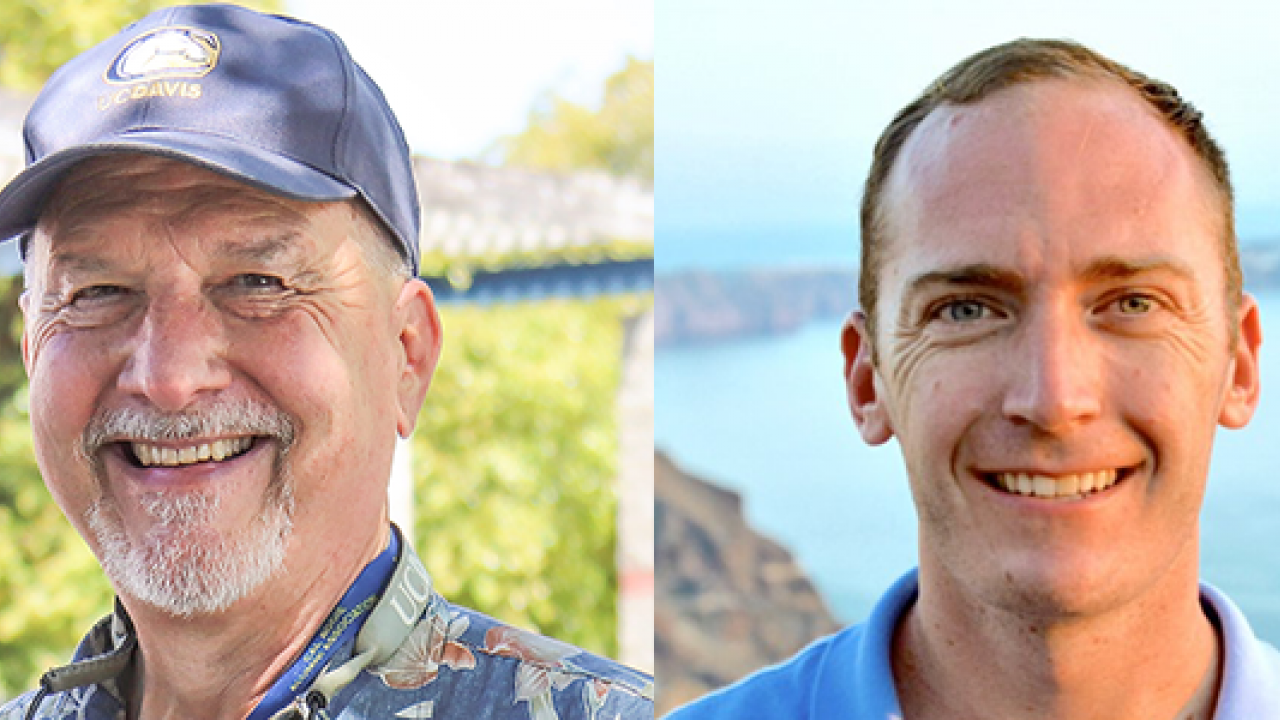 The UC Davis, Cal Aggie Alumni Association (CAAA) has elected Bill Cochran ’73, cred. ’74 as president of its board of directors and Charles Melton ‘08 as executive vice president and president-elect for 2018-2019. Both will assume the office effective July 1.

“CAAA is excited to see the direction Bill and Charles will take the organization this year,” said Rich Engel, UC Davis’ assistant vice chancellor for alumni relations and executive director of CAAA. “They both have bold, innovative ideas that will allow CAAA to better serve our alumni and members.”

Investing in Aggies – past, present and future

Cochran, formerly CAAA’s executive vice president and president-elect, has been a longtime active supporter of CAAA, having been a Life Member of the nonprofit organization since 1985. He has worked a combined 14 years on the board of directors since 2000.

He earned a bachelor’s degree in physical education from UC Davis, then went on to earn his teaching credential from the UC Davis School of Education. He would later attain his master’s degree in physical education from California State University-Sacramento. Cochran began his career teaching and coaching, before returning to graduate school to earn an Ed.D. in curriculum and instruction from Brigham Young University. He then completed a post-doctoral master’s degree in Educational Administration from National University.  He worked as a community college administrator for 20 years, before retiring from Shasta Community College in 2011.

Cochran said a priority for his upcoming term will be to focus on services to help alumni with their careers, such as continuing to build the Aggie network of alumni in industry.

“Students want to graduate and find jobs,” Cochran said. “I want to build upon CAAA’s legacy – and the legacy of Debby Stegura, our immediate past president – to grow the services and programs we have in place so alumni know that UC Davis is continuing to work for them after graduation and has an interest in them throughout their careers.”

Cochran is also a generous donor. He is thrilled to see new initiatives such as Give Day bring more awareness to the importance of philanthropy to UC Davis.

“I appreciate what I got out of this place, so I want to give back,” he said. “My wife and I for years have supported various programs at the university by volunteering and offering financial support. Helping UC Davis get better makes the degree more valuable. So, if you’re a degree holder, you are getting the benefit of your own donations.”

Cochran currently resides in Redding, California, with his wife, Becky, of 44 years. They have two daughters, Mandy ’07 and Alison ’03, who are both graduates of the School of Ag and Environmental Sciences.

A CAAA Life Member since 2005 and CAAA’s youngest ever president-elect, Melton has served in numerous capacities through the years. He was on the Student Alumni Association board of directors during his senior year at UC Davis and served as the president of the Washington D.C. Network from 2011 to 2014. Melton graduated from UC Davis in 2008 with a bachelor’s in political science and is now public policy manager at Turo, a car sharing marketplace, after working in Washington, D.C. in the U.S. House of Representatives and the UC Office of Federal Governmental Relations. He currently resides in San Francisco.

“Serving on the CAAA board gives me a unique opportunity to share ideas on how to continue to evolve and enhance how our alumni engage with CAAA and how CAAA and our campus can strengthen our connections with the alumni community,” Melton said.

Read bios of all CAAA board members.

About the Cal Aggie Alumni Association

The Cal Aggie Alumni Association board of directors is a group of alumni volunteers who lead the organization in its service to UC Davis and its more than 250,000 alumni. It leads the association in fulfilling its mission: “To enrich the lives of alumni, students, families and friends worldwide, and develop lifelong ambassadors for UC Davis.”

The CAAA board of directors meets four times a year to establish policy, develop goals and objectives, assist with long-range planning, and monitor alumni association finances. The board consists of a president, vice president, and up to 23 directors-at-large. Board members are elected for two-year terms with a three term limit, and participation is open to all CAAA members. Get involved by applying for board position!