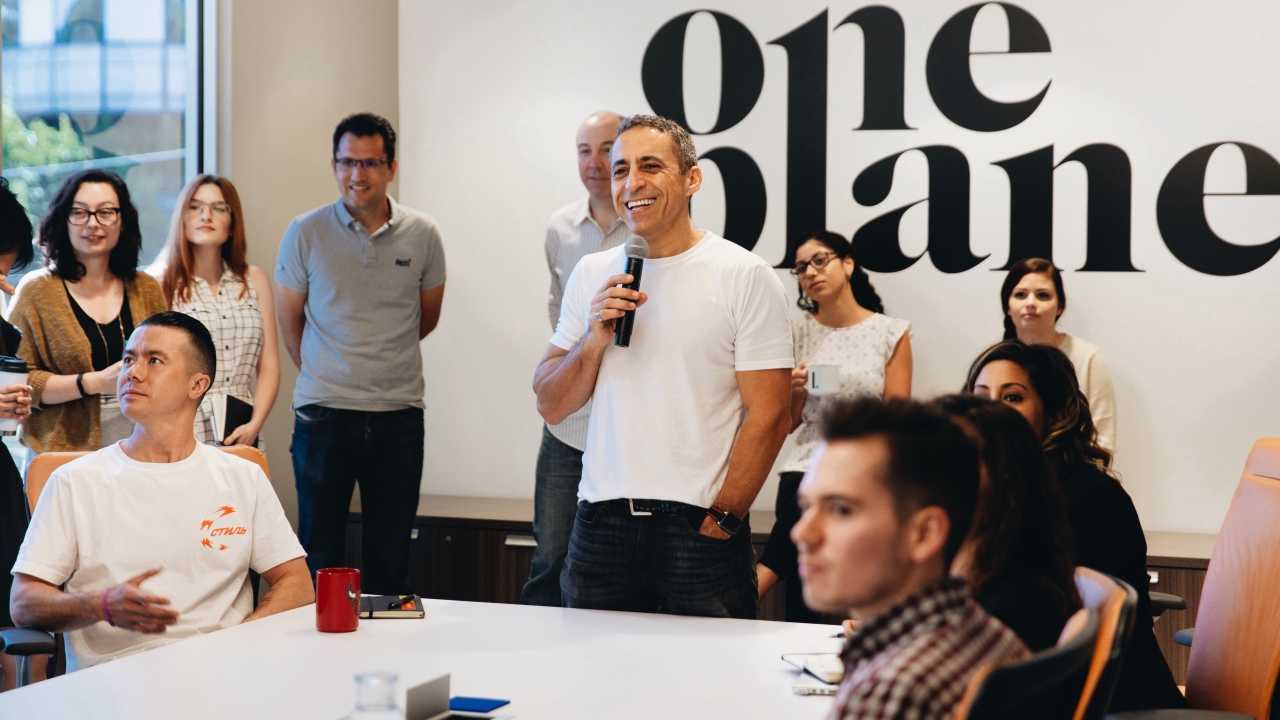 Alum motivates entrepreneurs to improve the world through business

There’s an Ag for That

This article is part of an ongoing series about the impact UC Davis alumni are making in our world.

Four ways One Planet makes the world a better place

As a child in Iran, Payam Zamani ’94 faced religious persecution because of his Baha’i faith—a religious minority in a country that is 99 percent Muslim and predominately Shia—and at the age of 16, he and his brother escaped from Iran to Pakistan and finally arrived in the U.S. as refugees with only $75 in their pockets.

Years later, his experiences led him to found One Planet Group, a hybrid tech company that has the mission to support strong business ideas while at the same time building an ethos that helps improve society and gives back to the community.

“I’d like to think that One Planet embodies everything I value in life,” Zamani said. “I refuse to wait for a law or the government to tell me I need to diversify the workforce, ensure fair wages and eliminate the gender gap.”

As One Planet’s chairman and CEO, Zamani says such values have helped him build a stronger company.

One Planet Group runs a suite of online technology and media businesses such as Buyerlink (ad tech marketplace), California.com (business service and online publication), Contractors.com, One Planet Media, and Quite Remarkable (a design and marketing company).

The company also invests through One Planet VC (Venture Capital) which supports 60 percent women and people of color founded/run companies. In 2020, One Planet was named the Better Business Bureau’s award recipient for the Torch Award for Ethics in the San Francisco Bay Area for its commitment to the highest standard of leadership character and organizational ethics.

One of the many ways Zamani and his company are giving back this year is by sponsoring part of the UC Davis Big Bang! Business Competition, an education-based competition that provides a forum for innovators across California to collaborate, develop and test business ideas. The 2021 Big Bang! Awards Show will be on Facebook Live on May 27 to celebrate the 16 finalist teams in the 2021 Big Bang! Business Competition and announce the winner.

“Partnering with UC Davis was a natural decision because we love getting exposed to new ideas and investing in entrepreneurs,” Zamani said. “UC Davis has been a big part of my life and I’m grateful for being able to get connected to and stay in touch with the new generation of young entrepreneurs coming out of this amazing school.”

This isn’t the first time Zamani has given to the university. In 2006 he and his wife, Gouya Zamani, created an endowed scholarship that supports students of Iranian heritage.

In 2020, Zamani was ranked as one of the top CEOs for Diversity in USA Today and Business Insider. UC Davis College of Agriculture and Environmental Sciences also honored Zamani with the Award of Distinction in 2018, the highest recognition presented to individuals whose contributions and achievements enrich the reputation of the college and enhance its ability to provide public service.

While Zamani initially transferred to UC Davis to study environmental toxicology, an unexpected internship gave him the opportunity to practice all aspects of running a business. The experience altered the direction of his life.

“I needed a job and found an internship called Student Painters posted at the career center,” Zamani said. “That summer, I ended up making $20,000 by running a house-painting business and became the rookie manager of the year in California. But what was more valuable than the money was that I was mentored and taught how to run a successful business. What I earned were my profits and not a wage and that had a lasting effect on me.”

Zamani realized he loved running businesses and soon became district hiring manager at Student Painters and mentored other newly recruited student manger entrepreneurs. Although he said his parents wanted him to go into the health and science field, he knew in his heart that entrepreneurship was the right path for him.

“We were all students running this multimillion-dollar business in the Bay Area successfully and making money so there’s no question that Student Painters had a big impact on my life,” Zamani said. “It helped me learn the basics of running a business hands on and gave me the confidence that many entrepreneurs need. This experience became highly valuable when a few months after graduating from UC Davis, I co-founded my first company, Autoweb—the first online car-buying service.”

Through his internship, Zamani made lifelong friendships and connections with a whole network of Aggies who also ended up becoming prosperous entrepreneurs. UC Davis became a place where he discovered his strengths and felt a deeper sense of belonging.

“Attending UC Davis wasn’t just going to school for me; it was a formative time that allowed me to really start viewing myself as an American citizen,” Zamani said. “UC Davis was the perfect place for me to learn about the culture and was a launch pad for my career.”

One incredible journey to live without fear

Zamani says that becoming an American citizen has been an extraordinary journey. As a young Baha’i in Iran, Zamani was shunned by his teachers, targeted and beaten by his classmates, and ultimately denied an education and the right to leave the country. Many Baha’is were arrested and executed during the 1980s because of their faith.

Zamani’s parents had no choice but to use their life savings to send Zamani on a dangerous journey from Iran to Pakistan where he faced near starvation and dehydration. He finally made his way to the U.N. outpost in the deserts of Balochistan and eventually to the U.S. embassy in Islamabad. He was assigned an American lawyer to fight for his admittance to the United States.

“I came to tears. I had just escaped human rights atrocities in my own country and here’s a country that doesn’t know me, doesn’t owe me anything and they’re willing to stand by me and make a case, in order to get me accepted to enter their country and ensure I’m offered a real chance to live a productive life,” Zamani said.

In 1988, Zamani was granted asylum along with his older brother and arrived in the U.S. in June of that year. Zamani put himself through high school and college without his parent’s financial support given that they themselves were refugees and halfway around the world; however, the discrimination and fear he experienced in Iran left a lasting impression on him.

“Having been denied my own rights, I value the little capacity that I have and how it can be used in enabling and empowering people who need help, whether it’s escaping gender-based violence, ensuring education, or healing racial injustices through One Planet and other projects that my wife and I commit to,” Zamani said. “One Planet stands by the philosophy of sacrificial giving and universal philanthropy because, at the end of the day, wealth is only of value if it serves humanity and is a source of good.”

The perfect blend of great leadership and social change

Zamani combines his steadfast work ethic and his belief in the Baha’i faith to guide the way he lives his professional and personal life. He promotes advancement in women’s equality, universal education, and the elimination of injustices caused by racism through his company, nonprofit contributions, and many other ad engagements.

“I believe that businesses have a responsibility for social good and through our decisions, we can make the world a better place,” Zamani said. “For too long greed has dominated the way entrepreneurs and CEOs have gone about building and operating businesses; it’s the archaic concept of maximizing shareholder value at any cost.”

For Zamani, “it’s important to have a humble posture of learning, meaning taking one step in the right direction at a time.” He never wants to assume that his business model is perfect but, he says, he knows his morals and intentions are pure.

“I’m most inspired by the people we touch as a company like our employees, our customers, vendors and the community at large,” Zamani said. “I feel that as a company we are focused on having that bigger, more positive impact on the world, and we won’t stop until we know we’ve tried everything in our power to contribute to solving the social, environmental and other problems that exist today.”